Skip to content
Home ›› Common articles about cats ›› What is ticked tabby in Scottish and British cats?

What is ticked tabby in Scottish and British cats? 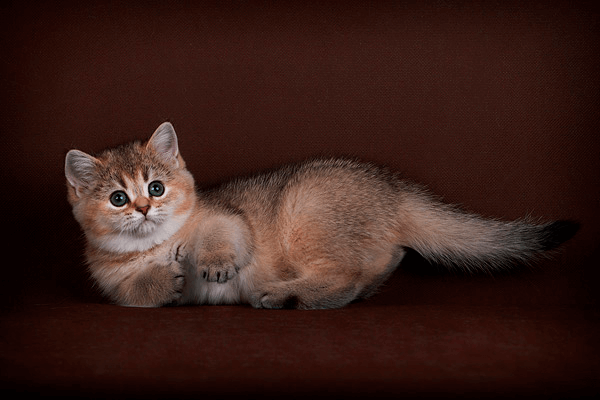 Ticked tabby is a zonal hair coloring, that is, there is an alternation of dark and light stripes on the hair. On the back, the concentration of ticked hairs is more frequent, which creates the effect of a dark stripe on the back, then the ticked hairs are scattered along the body, fading towards the stomach.

Where did the Scottish and British ticked cats come from?

From the study of the history of the Scottish cat breed, we already know that during the formation of the breed, Scottish cats were mated with British cats. It was the British ticked tabby cat that gave such a beautiful color to the Scottish along with golden and silver color. Where did the British cat ticked tabby color come from? Looking for the answer to this question, we run into two theories.

However, the breed standards for Scottish cats ticked color allow the presence of stripes on the tail and paws. And besides, most of the Scottish kittens ticked tabby color are born with a pattern that tends to wear off, turning into a ticked as the Scottish kitten grows. That is, ticked tabby gains its intensity over time, “erasing” the pattern.

Such ticked tabby is called “common” and its basis is gene (U-Unpatterned). It hides the pattern almost completely if it is homozygous. But if it is heterozygous, then on such a ticking a “shadow” pattern appears on the body and clear on the tail and paws. At the same time, the “common” ticked differs from the Abyssinian ticked in that it begins to work after the birth of a kitten and as it grows. Visually, the “common” ticked is close to the Abyssinian, usually in a silver ticked tabby color. A Scottish golden ticked tabby may have a “shadow” pattern.

It is precisely the “common” ticked tabby that is taken as the basis for the second theory of the appearance of ticked tabby in the Scottish ticked and British ticked cats. The essence of the theory is as follows – during the introduction of the chinchillas group of colors into the British, and then into the Scottish breed, breeders had to produce mating of chinchillas and shaded with solid colors. From such matings, kittens with “shadow” patterns were obtained, but showing the phenotype of a ticked tabby, not quite a pure “Abyssinian” ticking. And in the first time the appearance of such a color, it was recorded as shaded. At show the judges had mixed opinions. Someone considered this color to be a marriage in a shaded color, while someone attributed this color to a new color and recorded it as a color unrecognized by the breed standard and did not assign a title to this cat.

The distinction and registration of ticked color in Scottish and British cat breeds has made it easier to participate in shows.

At present, Russian breeders of Scottish cats of ticked colors are working both with the U gene – “common” ticked, and with the TA gene – “Abyssinian” ticked.